In a chilling development for human and democratic rights worldwide, prominent Dutch activist and bio-pharmacist with a PhD in nanotechnology, Willem Engel, has been arrested twice in Holland for exercising his rights to free speech, freedom of assembly, freedom of association and freedom of movement.

Since the outset of the COVID-19 operation, Willem Engel has fought against mainstream misinformation regarding SARS-COV-2, misuse of PCR tests, and “vaccine” propaganda. Willem helped to launch Doctors for Covid Ethics in March 2021 by hand-delivering our first letter to the European Medicines Agency (EMA), and by spreading news of our EMA letters, and our subsequent actions, on his platforms across Europe.

On March 16th 2022, Willem was summarily apprehended on the street for reasons that were unknown to him at the time. Children’s Health Defence Europe reported in an article titled Things Get Serious:

The article observed that:

In a letter to the Ambassador of the Netherlands in Berlin, Dr Ulwe Alschner PhD wrote:

Read the Children’s Health Defense article, with the letter to the Dutch Ambassador, and video footage of Willem’s first arrest, here.

Upon his arrest on March 16th Willem was accused of posting “inflammatory messages on the subject of Corona” on social media, and was imprisoned for 14 days. He was released on March 30th under the condition that he refrain from expressing himself on social media, which would result in a further 90 days imprisonment.

Willem must attend court at the Grand Criminal Chamber for a trial before three judges, on June 13th 2022, to defend himself against a charge involving “incitement via Facebook”.

Willem left prison with bags full of letters, postcards and emails of support from countless people around the world.

Watch a translated speech by lawyer Jeroen Pols, during a demonstration for Willem’s release on Sunday 20 March 2022 in Amsterdam.

Joeren Pols is a lawyer for Viruswaarheid (Virus Truth), and co-combatant with Willem in 20 lawsuits against the Corona measures in the Netherlands. He said:

Next, on April 3rd 2022, Willem was pulled over in his car on the way to a protest at which he intended to speak, and arrested by two police officers. The officers, who were heavily masked, refused to identify themselves, contrary to Dutch law, and handcuffed Willem, also reportedly unlawfully.

At his arrest Willem was accused of speaking out on social media. In reality he had given an interview to a news channel.

John Goss of the website All the Goss wrote:

Following his second arrest Willem was released from prison after two days, on April 5th. The judge overturned the original ban on his social media activity, finding the original ruling too harsh in the “fundamental” light of freedom of speech. Willem is, therefore, once again temporarily free to post on social media ahead of his hearing on June 13th.

Willem Engel is a gentle, principled and tenacious defender of his fellow human beings and their rights, sovereignty, dignity and freedom.

And in discussion with Taylor Hudak at the Last American Vagabond here.

In August 2021 Willem accompanied Holocaust survivors as they delivered a letter to the EMA, with a reading of the letter by one survivor. The women hugged Willem in gratitude and affection after the event.

Willem’s case highlights the reality that the true target of coronavirus measures is not a pathogen. Nor is the true prize public health. If it were, effective treatments would not have been suppressed in order to trick and coerce populations into taking ineffective and deadly nanoparticle gene-based agents, wrongly disguised as “vaccines”. The true target is our rights and freedoms, and our humanity itself. The true prize for those who seek to violate those rights and freedoms is totalitarian control.

Willem’s humanity and his fight for our rights stands in stark contrast to the pronouncements of World Economic Forum luminary and senior advisor to Klaus Schwab, Yuval Noah Harari, who has recently declared:

May we all join Willem in proving Harari wrong. 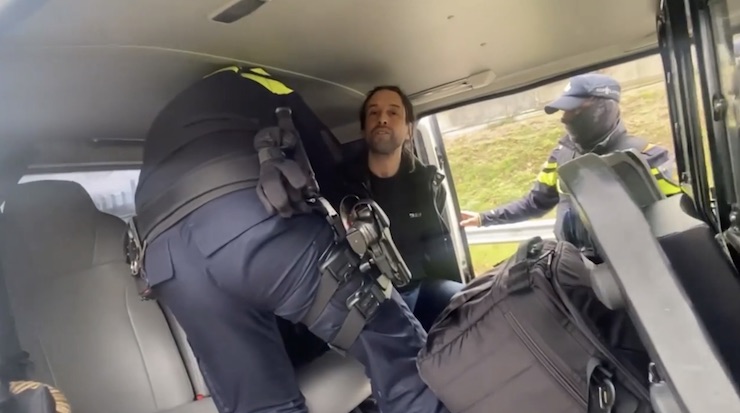