Organized by Doctors For Covid Ethics

The Case is Closed – the Final Evidence

19:06 CET The falling of the House of Cards
Plenary by Thomas Binder, MD

19:40 Three major consequences to be expected

The Future Scientific and Legal Aspects

21:10 Controversies of Institutions (WHO, EMA and more)

Covid-19 and the Global Coup

First time ever presentation of a Survey of the Impact of Covid-19 Inoculations by Prof. Mark Skidmore PhD

22:35 Freedom Fighting on the Ground

22:55 The Truth shall Set You Free – Closing Remarks

Dr. Thomas BINDER, MD is specialised in Cardiology and Internal Medicine, with a thesis in Immunology and Virology, and 32 years experience in diagnosis and treatment of Acute Respiratory Illness.

Prof. Arne BURKHARDT MD is a German pathologist, researcher. He looks back on many years of teaching experience at the Universities of Hamburg, Bern and Tübingen as well as visiting professorships/study visits in Japan (Nihon University), USA (Brookhaven National Institute), Korea, Sweden, Malaysia and Turkey. He headed the Institute of Pathology in Reutlingen for 18 years, after which he worked as a practicing pathologist. Prof. Burkhardt has published over 150 articles in journals and as contributions to handbooks. He has also certified pathological institutes.

Catherine Austin FITTS is the president of Solari, Inc., publisher of the Solari Report, and managing member of Solari Investment Advisory Services, LLC. Catherine served as managing director and member of the board of directors of the Wall Street investment bank Dillon, Read & Co. Inc., as Assistant Secretary of Housing and Federal Housing Commissioner at the United States Department of Housing and Urban Development in the first Bush Administration, and was the president of Hamilton Securities Group, Inc. Catherine has designed and closed over $25 billion of transactions and investments to-date and has led portfolio and investment strategy for $300 billion of financial assets and liabilities. She graduated from the University of Pennsylvania (BA), the Wharton School (MBA) and studied Mandarin Chinese at the Chinese University of Hong Kong.

Mary HOLLAND is the president of Children’s Health Defense and Director of the Graduate Lawyering Program at NYU School of Law. She has written several law review articles and blog posts on vaccine law and policy and is the co-author and co-editor of the books “Vaccine Epidemic” and “HPV Vaccine on Trial: Seeking Justice for a Generation Betrayed.” She has testified to retain or expand vaccination exemptions in the California, West Virginia, Maine and Vermont legislatures and has has appeared in several documentaries and programs on vaccine issues. Mary is chair of the advisory board of Health Choice and a member of the advisory boards for the Elizabeth Birt Center for Autism Law and Advocacy, the Otto Specht School and Actionplay. Educated at Harvard and Columbia Universities, Mary has worked in international public and private law. Prior to joining NYU, she worked at major U.S. law firms, with three years based in Moscow, Russia. She also worked at a U.S. human rights organization as Director of its European Program. She has taught courses at Columbia Law School and has served as a consultant to the Aspen Institute Justice and Society Program.

Dr. Charles HOFFE MD has been a practicing physician in British Columbia for 28 years. He has experienced regulatory consequences after speaking and writing about vaccine dangers, including a letter to his provincial public health officer regarding vaccine-related harms he witnessed in his patients.

Renate HOLZEISEN is a lawyer in South Tyrol who is fighting the Corona measures legally, since in her opinion any newly developed vaccine can not be used in the ongoing process of making them mandatory in connection with the reasoning that has been used for their approval. As a barrister, she also practices before the Supreme Courts and specializes in European and International Law . She is the fundamental force in cases at European and also at national level – unifying, sharing and coordinating initiatives, and is actively engaged in issues regarding Fundamental Rights and Freedoms.

Taylor HUDAK, MA, is an independent journalist focusing on free speech, press freedoms, whistleblowing, and US foreign policy. Taylor’s work can be found on acTVism Munich YouTube channel, as well as The Last American Vagabond.

Dr. Stephen MALTHOUSE is one of the founders of Canada Health Alliance. He is a BC Physician who became somewhat infamous for his courageous steps in questioning the COVID-19 extreme measures. In October 2020 Dr. Malthouse wrote an open letter to BC Health Officer, Bonnie Henry, calling her out on the drastic measures being implemented which were not based on scientific evidence and were causing a great deal of harm. Dr. Malthouse is the current President of the Canadian Integrative Medicine Assoc. He has practiced medicine for 42 years in rural, urban, emergency room, palliative care, and family practice settings as well as being involved in overseas research into childhood illnesses. Dr. Malthouse has a special interest in integrating nutritional, conventional, and alternative therapies in day-to-day medical practice Currently he is on the doctors tour in British Columbia, Educate B4U Vaccinate, with Dr. Charles Hoffe and Dr. Daniel Nagase.

Meryl NASS, MD, ABIM, is an internist with special interests in vaccine-induced illnesses, chronic fatigue syndrome, Gulf War illness, fibromyalgia and toxicology. As a biological warfare epidemiologist, she investigated world’s largest anthrax epizootic in Zimbabwe, and developed a model for analyzing epidemics to assess whether they are natural or man-made. She has played a major role in creation of a coalition that has fought the Anthrax Vaccine Immunization Program. Nass is active in assisting legal teams defending anthrax vaccine refusers and ill service members in the U.S. and Canada.

Prof. Michael PALMER MD is Associate Professor in the Department of Chemistry at the University of Waterloo, Ontario, Canada, and is board certified in Medical Microbiology with a focus on Pharmacology, metabolism and biological membranes. His experimental research focus is on bacterial toxins and antibiotics. Michael has authored a textbook on Biochemical Pharmacology.

Kati SCHEPIS completed her pharmacy studies at the ETH in Zurich in 2003 and worked in the Swiss branch of a global pharmaceutical company for over 12 years, first in drug approval and then in the medical department. She lives in Winterthur and is the proud mother of two boys.

Prof. Mark SKIDMORE PhD is Professor of Economics at Michigan State University where he holds the Morris Chair in State and Local Government Finance and Policy. His research covers topics in public Xnance, regional economics, and the economics of natural disasters. Mark created the Lighthouse Economics website and blog to share economic research and information relevant for navigating tumultuous times.

Astrid STUCKELBERGER (MSc PhD PD) is an international health scientist, UN/WHO expert. She performed researches from clinical to epidemiological studies for the policy-makers (United Nations, European Commission, Governments and served on IHR WHO and ERC (Int. Research Ethics Committee) during the last 30 years. She taught at the Faculty of Medicine at various Uni’s in CH. She has published 12 books, contributed to several WHO books (mental health policy, International Research Ethics Training, INNOV8, etc.) and more than 180 scientific articles, policy papers, governmental, EU and UN reports. She received an international Award from the UN secretary-general for the work accomplished and from Swiss organisations; she was nominated in the 100 personalities of Switzerland.

Polly TOMMEY is director of programming for CHD-TV. She is the mother of Billy Tommey, whose vaccine injury story is prominently featured in the documentary Vaxxed: From Cover-Up to Catastrophe. Tommey is a film producer known for Who Killed Alex Spourdalkis? (2015), Vaxxed: From Cover-Up to Catastrophe (2016) and Vaxxed II: The People’s Truth. She is a book author, founding editor-in-chief of the world’s preeminent autism magazine, The Autism File and co-founder of the Autism Media Channel. An outspoken autism advocate and founder of the Autism Trust in the UK and U.S., Tommey has appeared in print and television media around the globe, gone head-to-head with top political leaders and never compromised her position on telling the truth about vaccine injury.

Professor Richard A. WERNER PhD is a university Professor in banking and Finance. He holds a First Class Honours in Economics from the London School of Economics and a doctorate in Economics from the University of Oxford. He is a founding chair of Local First, a community interest company establishing not-for-profit community banks in the UK and in 2008 he founded and has been director of the Centre for Banking, Finance and Sustainable Development – the first research centre to focus on the link between the Financial sector and sustainability issues. He has been professor of monetary, macro and development economics at Goethe-University Frankfurt, Professor of International Banking at the University of Southampton, and assistant professor in economics and finance at Sophia University, Tokyo. Richard has worked as Chief Economist, Senior Managing Director and Senior Consultant in private industry, including at Bear Stearns and Jardine Fleming Securities, and as visiting scholar and
visiting researcher at the Japanese Ministry of Finance and the Bank of Japan. His book Princes of the Yen was a No. 1 bestseller in Japan.

Dr. Michael YEADON PhD was Formerly Vice President & Chief Scientific Officer Allergy & Respiratory at Pfizer Global R&D. He holds Joint Honours in Biochemistry and Toxicology and a PhD in Pharmacology. He is an Independent Consultant and Co-founder & CEO of Ziarco Pharma Ltd. 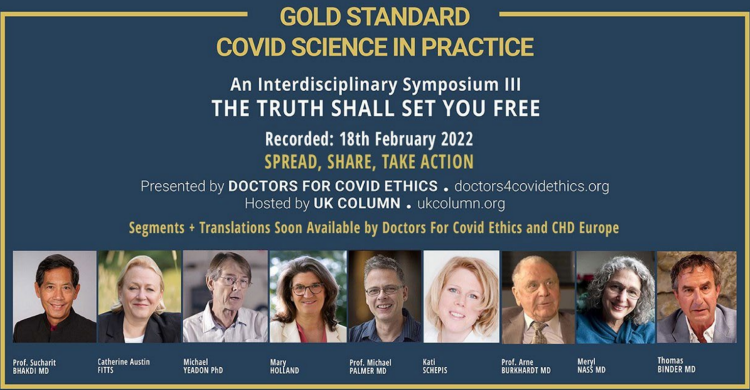