Freedom is the Cure: Unpacking and Defeating the Medical Tactics of a World Takeover

Below is an email that was sent out to Doctors for Covid Ethics subscribers and friends, summarising the first session of our fourth symposium, whose title carries what we view as one of the most important lessons of the COVID-19 operation: mRNA vaccines pose a serious threat to mankind.

Thank you for your ongoing interest in our endeavours. We hope that you have been finding information of interest and assistance to you on our website and Telegram channel, where we continue to provide honest, independent scientific analysis in the face of a global onslaught of weaponized ‘science’.

To that end, today we bring you the first session in our most recent symposium, held on June 11th 2022, titled, Freedom is the Cure: Unpacking and Defeating the Medical Tactics of a World Takeover, generously hosted by UK Column, and held in collaboration with Children’s Health Defense.  At this our fourth symposium we brought together experts in science, medicine, psychiatry, finance, journalism and the law, to place the abuses of science surrounding COVID-19 in the context of a rapidly escalating global power grab, and against a backdrop of historical abuses by the medical profession. You can read about the symposium contributors here.

We have divided each session into individual presentations for you to watch and share at your leisure, summarised with links below. Meanwhile, if there just is one piece of information we hope you will take away from this event, to share with your family and friends, it is this:

1. Sucharit Bhakdi: The fundamental mechanism of damage is simple and universal

To open the symposium, Immunologist and Former Chair at the Institute of Medical Microbiology and Hygiene, Johannes Gutenberg University of Mainz, Professor Sucharit Bhakdi MD, explained how and why mRNA injections pose a mortal danger to their recipients, irrespective of the disease for which they are deployed. He called the decision to use the deadly COVID spike protein for the first mRNA rollout a uniquely brilliant tactic, under which the inherent dangers of mRNA technology can hide. 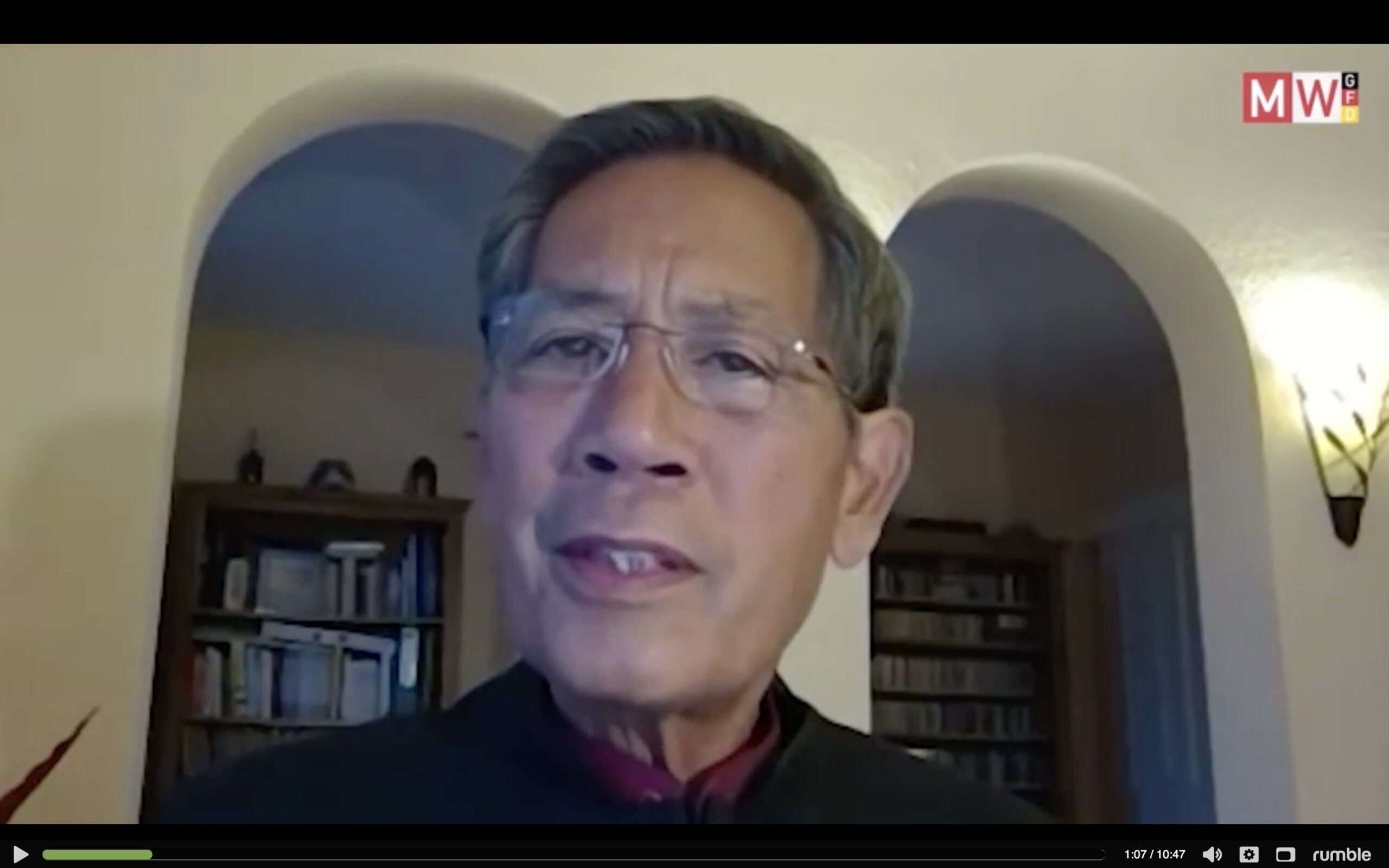 The reality, Dr Bhakdi explained, is that mRNA technology – spike protein or not – perverts the genetic functioning of the body’s cells by instructing them to produce disease fragments. This transforms our own cells and tissues from ‘self’ into ‘non-self’, inviting the immune system to attack. It is a recipe for medical disaster that turns the body against itself. Dr Bhakdi called the plan to roll out the underlying mRNA technology from COVID-19 to conventional vaccines:

“The greatest conceivable man-made catastrophe of all time… Routine introduction of gene-based vaccines spells the downfall of man and mankind.”

2. Michael Palmer: Summary of the evidence – irrefutable proof of causality

Dr Michael Palmer, former Associate Professor of Biochemistry at the University of Waterloo, provided an overview of damning autopsy evidence, which unambigiuously confirms that Sucharit Bhakdi, the first in the world to warn of blood clots and organ damage from mRNA ‘vaccines’, was right. Dr Palmer spelled out the significance of histology and histopathology findings from post-vaccine autopsies performed by Dr Arne Burkhardt, showing expression of spike protein, immune attack, and catastrophic damage such as aortic rupture in organs throughout the body. 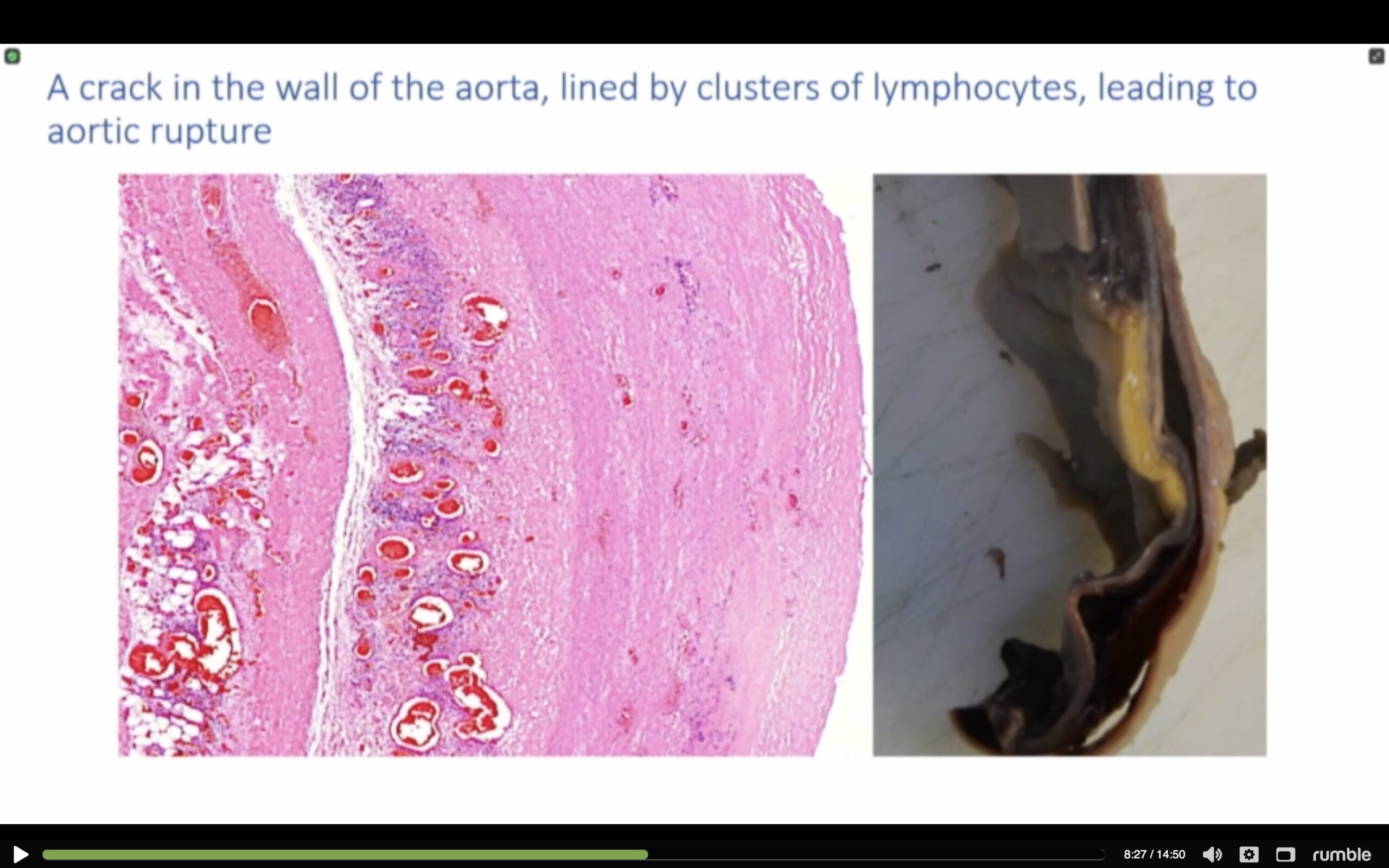 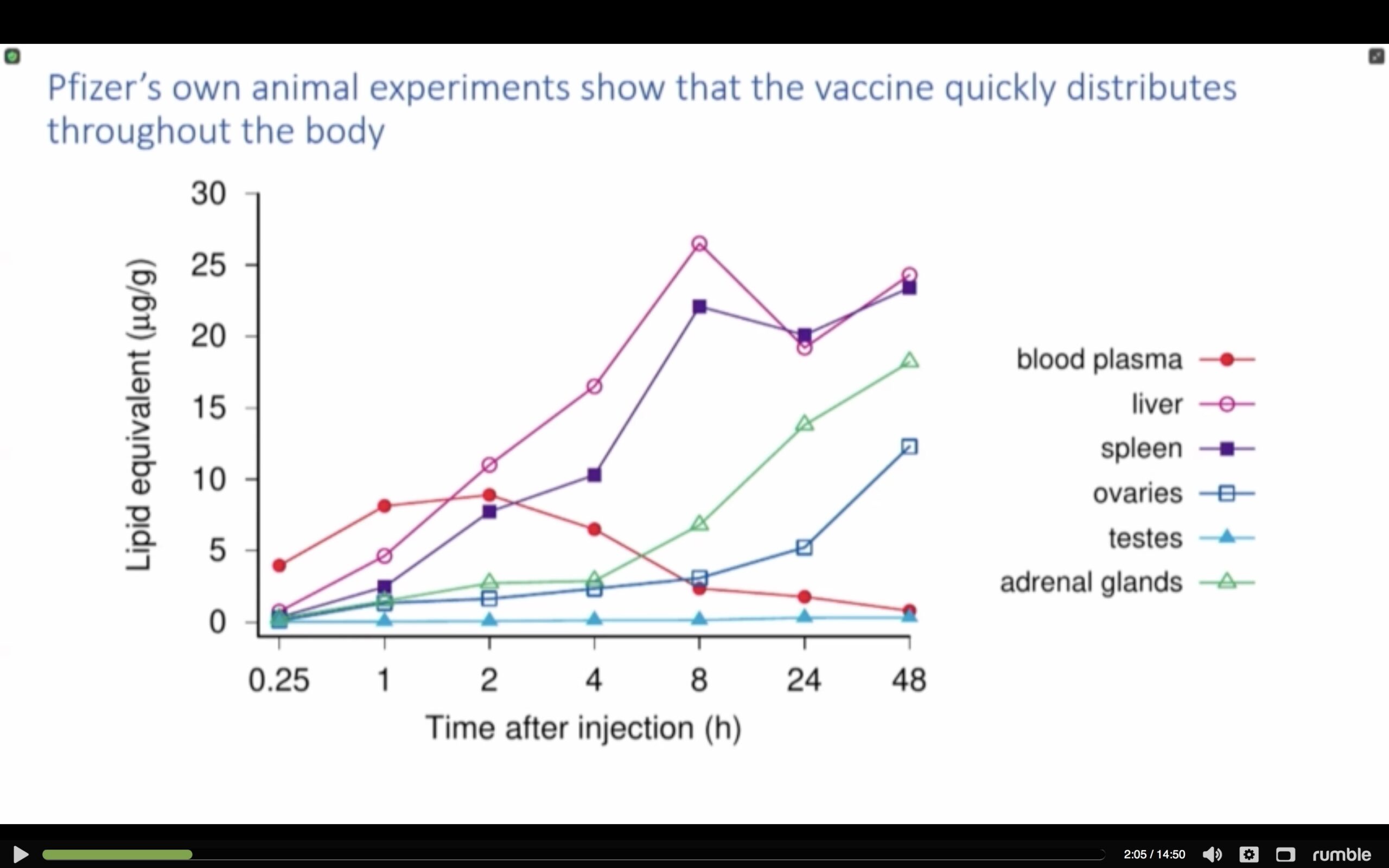 Dr Palmer also discussed the “very remarkable” finding that bronchial tissue in the vaccinated continued expressing spike protein for nine months after vaccination. “We were promised this would be short-lived”, Dr Palmer said, noting that that the injected mRNA molecules should be expected to last only days, or at most a very few weeks.

“The officially propounded idea.. is that the mRNA does not replicate. So how come even nine months after injection we still see the expression of the spike protein in the mucous membranes? This needs to be explained.”

As do findings of a Swedish study in 2022 showing that the Pfizer mRNA vaccine can convert into a DNA copy which can subsequently integrate into the chomosomal DNA. Such genetic modification may explain the dangerously prolonged spike protein production evidenced in Dr Burkhadt’s autopsy findings. 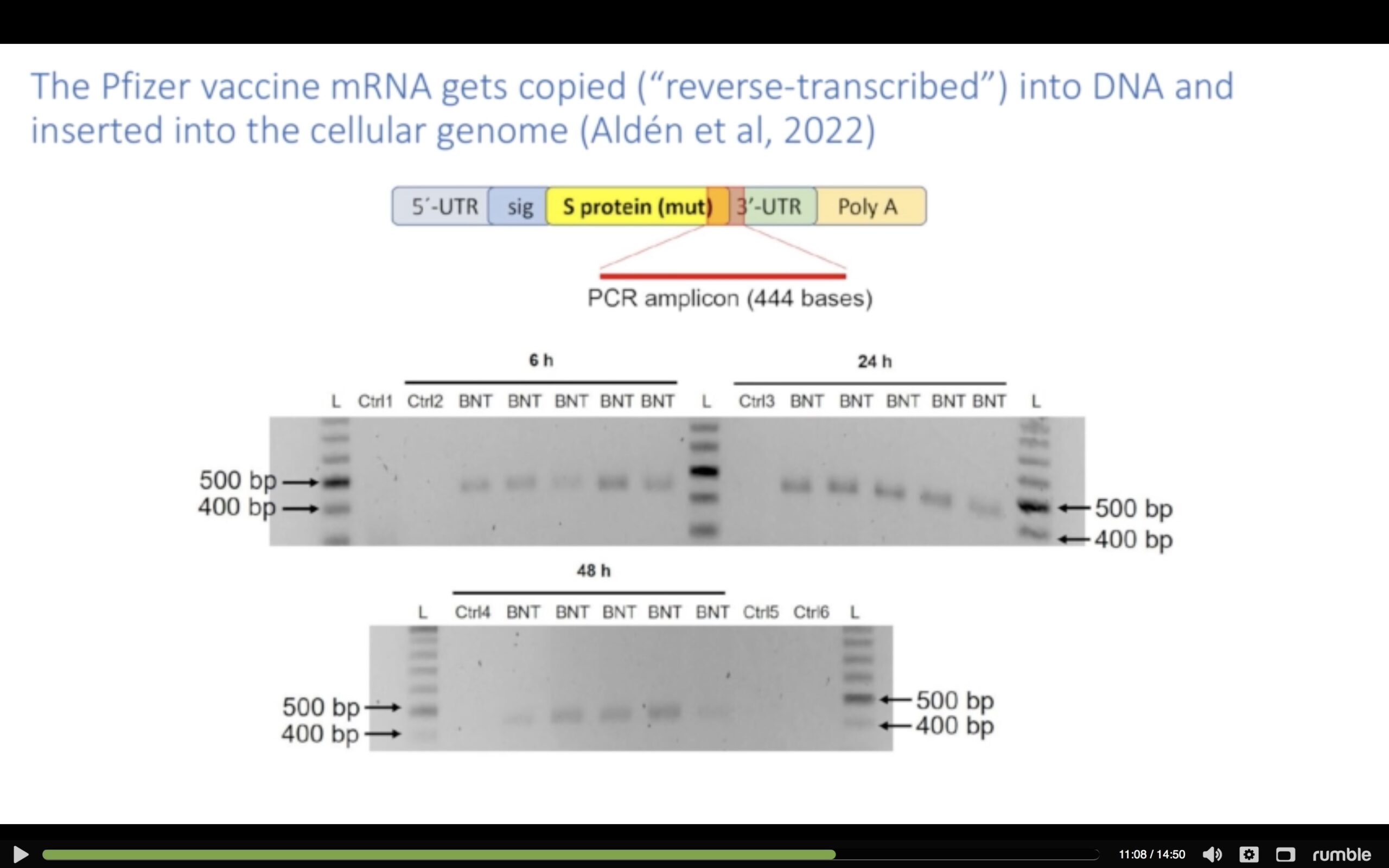 On all of these developments Dr Palmer stressed:

“We have to expect that the same will occur with any other mRNA vaccine, regardless of whether it is directed against COVID or any other infectious agent”

Sasha Latypova is an expert in drug development with 25 years experience in pharmaceutical R&D, including working in clinical trials globally, and interacting with the FDA on regulatory approvals and pharmaceutical data. She took the audience through the shocking breaches of protocol perpetrated by Pfizer and Moderna to bring their mRNA vaccines to market, and the role of the FDA in waiving those breaches through.

Sasha Latypova said that at every step Pfizer and Moderna showed a “shocking disregard for any previously established regulatory norms, and the FDA did not push back.” She added that European and other regulators operated in lockstep with the FDA to enable the manufacturers to sidestep protocol. She shared an image mapping out the typical pre-clinical steps omitted by Pfizer and Moderna, from drug interactions to cardiac effects to genotoxicity to carcinogenicity. 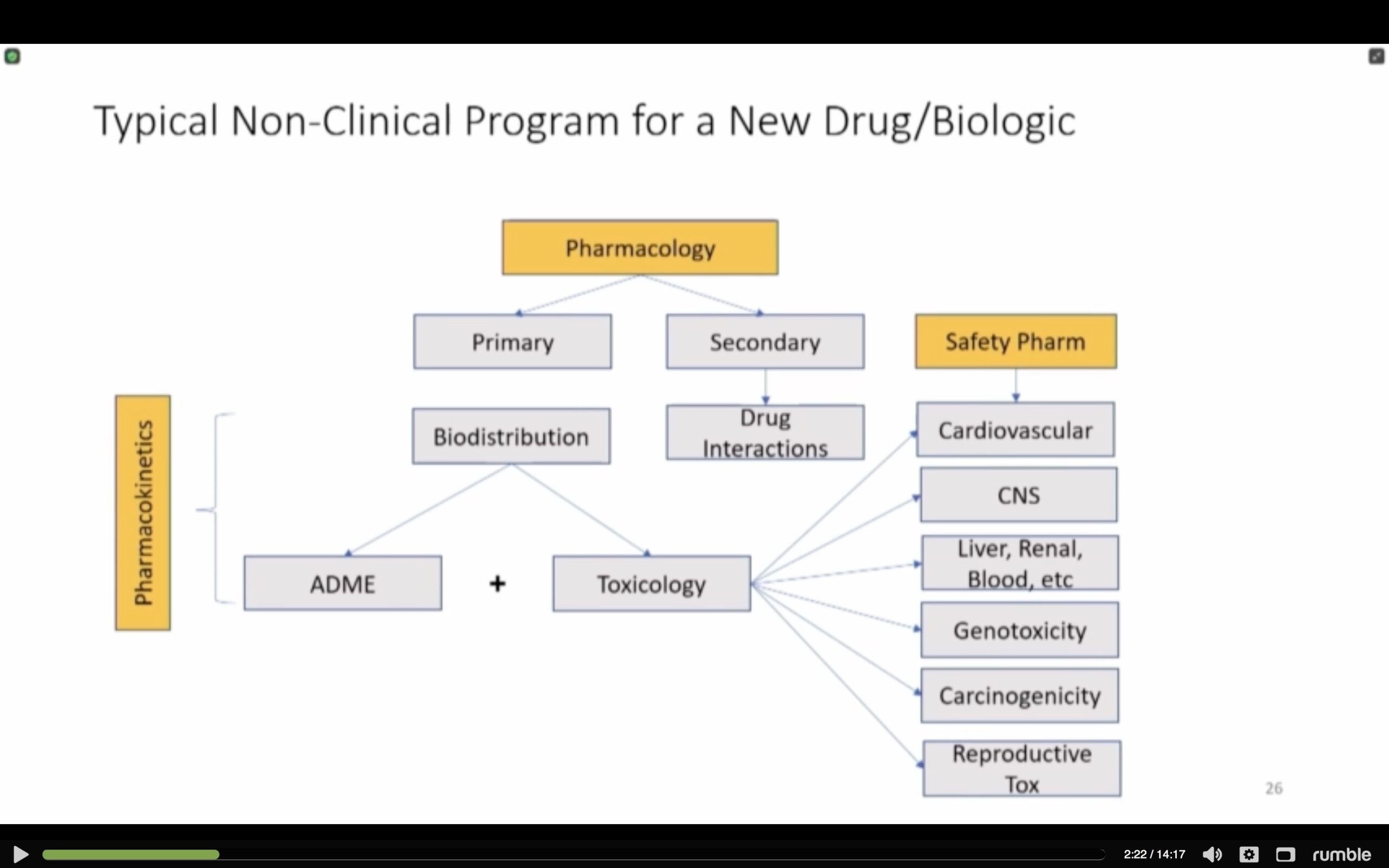 In addition to abrogating its regulatory functions, Sasha Latypova explained that the FDA misled the public on preclincal (animal) data regarding safety in pregnancy. Moderna found that its mRNA shot led to statistically significant skeletal malformations in the fetuses and offspring of injected pregnant rats, while the FDA wrote on its website that there were no pregnancy-related skeletal malformations. “Why is the FDA lying on behalf of the manufacturer?” Sasha Latypova asked. In Pfizer’s human clinical trial, she said, 90% of the pregnant women who were followed up by Pfizer lost their baby.

Read her article on Pfizer and Moderna’s fraud here

Dr Thomas Binder is a specialist in cardiology and internal medicine, with a thesis in immumology and virology. He offered his perspective as a practicing clinician on the neccessity, efficacy and safety of mRNA vaccines, presenting both clinical and real-world evidence that the mass mRNA ‘vaccination’ campaign was neither necessary nor effective nor safe. In reality, the mRNA injections show negative efficacy, he explained. In other words, they do more harm than good, based not only on adverse events databases but numerous peer reviewed papers. 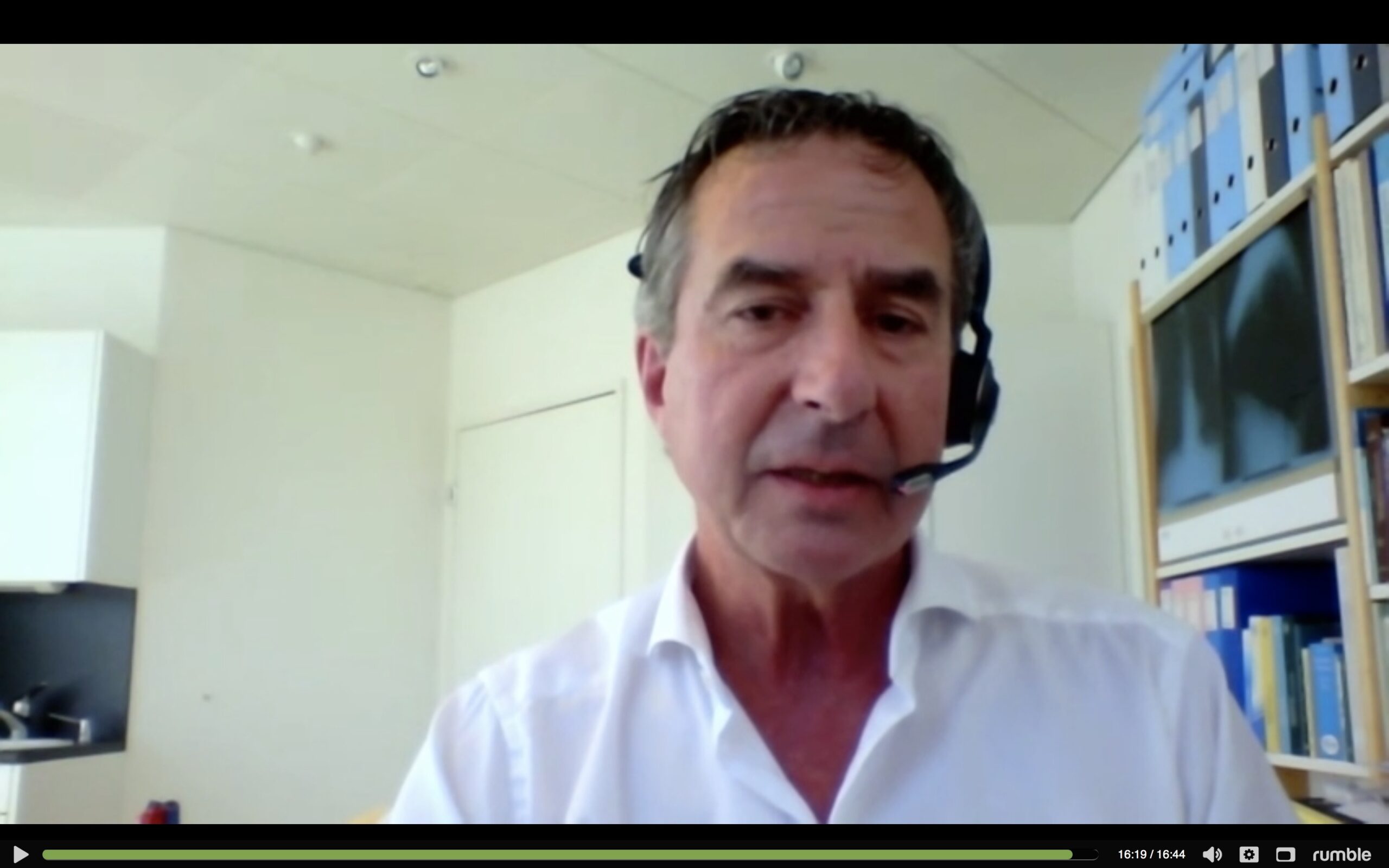 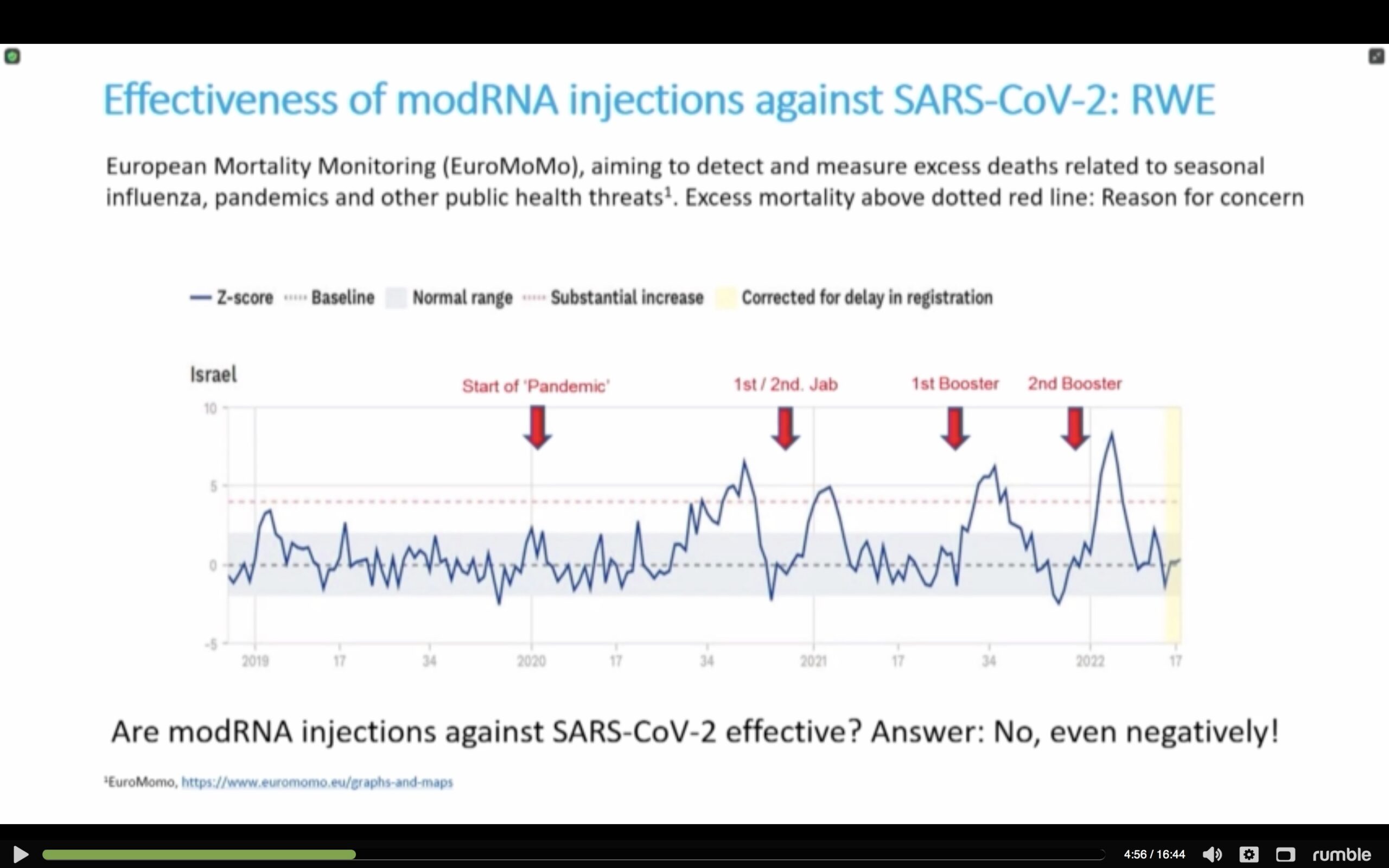 Dr Binder went on to describe post-vaccine injury syndromes caused by a combination of the self-to-self attack outlined by Sucharit Bhakdi and Michael Palmer, and the known toxicity of the mRNA injections’ lipid nanoparticles. Post-vaccine injury syndromes can involve localised damage in some people, and generalised damage in others, he said, resulting in specific diagnoses or diffuse systemic syndromes.

“As if this were not enough, there is repression and negligence by most doctors, hospitals, universities and medical journals. There is a scientific, medical and humanitarian disaster of unprecedented proportions.” We are just beginning to see “the tip of the iceberg,” Dr Binder warned.

For those suffering vaccine injuries, Dr Binder outlined specific treatments for localised injuries, and he drew attention to the protocol for treating diffuse systemic post-vaccine syndromes published by the Frontline COVID-19 Critical Care Alliance (FLCCC) on May 25th 2022.

“Dear fellow humans,” he concluded, “if you have been injected… do never despair. More and more doctors are willing to help you.”

Polly Tommy, film producer, author and director of programming for CHD TV, interviewed lawyers Mary Holland, Director of the Graduate Lawyering Program at NYU School of Law and president of Children’s Health Defense, and Renate Holzeisen, European Human Rights lawyer, Barrister and specialist in European and International Law, who is fighting the Corona measures in Europe. 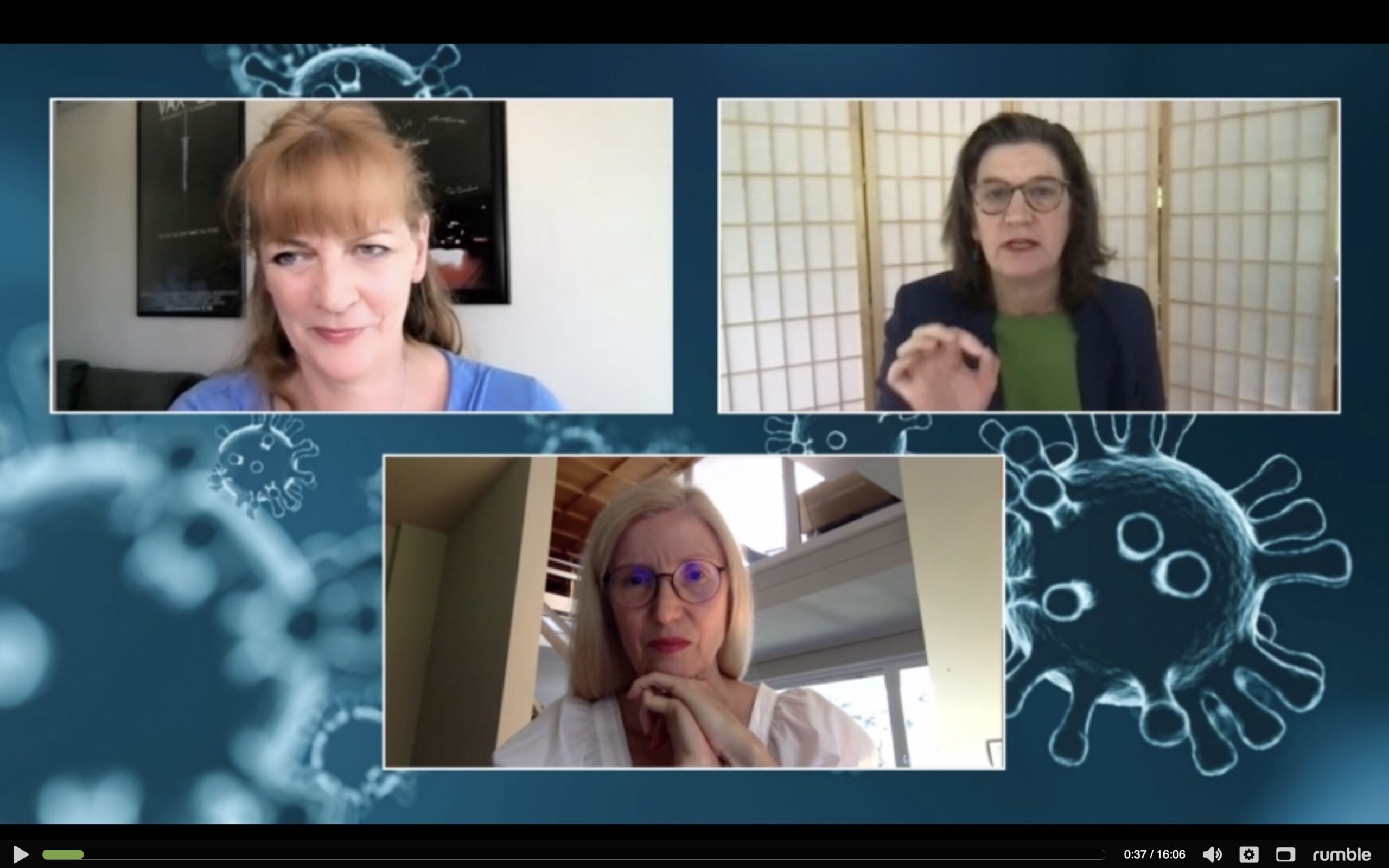 Mary Holland outlined successful US lawsuits against the CDC and other agencies to date, which have resulted in mask mandates and vaccine mandates being struck down, adding that many other US lawsuits against COVID measures are underway. On the prospects of legal success she said:

“Judges are humans…  The courts are following the culture. I do believe that as time goes by we will see more and more successes in courts, because the judges will undersand better… Pretty much everybody at this point knows somebody who suddenly died in their sleep, or had an unexpected heart attack… It is seeping into the culture that something is desperately wrong with these shots.”

Renate Holzeisen explained the legal significance of findings such as that from the University of Malmö that mRNA products carry a real risk of modifyling the DNA, reflecting the fact that the mRNA technology performs the same function as products previously defined as gene therapies. She stressed that there is a clear provision in the EU based on European Law that even for products not formally defined as gene therapies, but which perform the same function, an evaluation procedure must be followed via the Committe for Advanced Products. That procedure involves testing for gene toxicity and carcinogenicity, which has not been performed for the COVID mRNA ‘vaccines’. On this basis legal actions in Europe are seeking withdrawal of the conditional authorisations under which mRNA vaccines are being deployed.

Finally Mary Holland and Polley Tommey joined Brian Hooker, specialist in microbiology and biotechnology and Associate Professor of Biology at Simpson University, to discuss COVID shots and fertility. Mary Holland began by describing a WHO-backed vaccination campaign in Kenya which is the subject of a documentary called Infertility: A Diabolical Agenda. The documentary reveals that the WHO worked for 30 years to create infertility-causing vaccines, and pushed out vaccines in Kenya that amounted to forced sterilization of young women.

“In today’s context where we’re talking about nations of the world handing over health authority to the WHO, people need to understand that it has a very dark past in Africa,” she said.

Mary Holland cited a Kenyan doctor in the film who warned, “once they’re done with Africa they’re coming for you.” 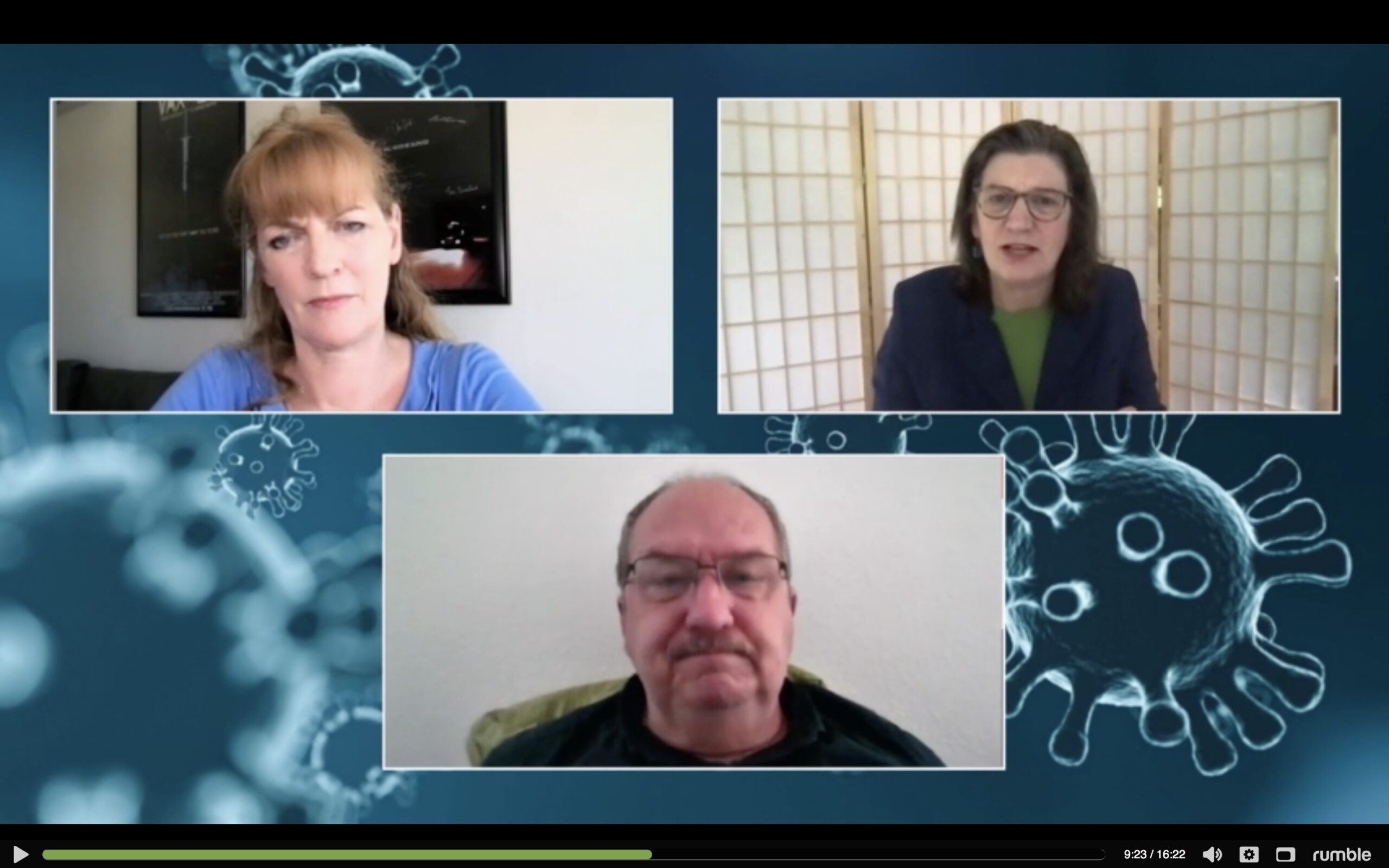 Brian Hooker elaborated on that theme by noting that the mRNA COVID vaccines have not been evaluated for safety in pregnancy, nor with respect to birth defects. He added that fertility issues associated with COVID-19 injections are “off the map”. Reports of vaccine-related fertility problems to VAERS following COVID vaccines, he said, have increased 10-fold in the last 18 months compared to the entire previous 31 years.

Issues being reported include menstrual difficulties, passing of clots, miscarriage, bleeding in post-menopausal women, and similar problems in unvaccinated women close to those who have been vaccinated. Shedding of the uterus, moreover, a very rare condition, has increased dramatically in the medical literature since the rollout of COVID vaccines. Dr Hooker noted that these phenomena are not limited to mRNA injections, and are being observed across COVID shots. He added that biodistribution studies conducted by Pfizer showed the vaccine to accumulate in the ovaries, and that the only human study to examine COVID injections during pregnancy ran for just three months.

Polly Tommey asked whether mothers injecting their baby girls and young daughters with COVID vaccines may be causing their sterilization. “Yes” was Brian Hooker’s answer.

Taylor Hudak: Thank you for watching, and please share this information

Taylor Hudak is an American journalist focused on human rights, media freedom and global corruption. She researches, writes, and produces video reports and interviews for The Last American Vagabond and acTVism Munich, and has been dedicated to bringing you the voices, knowledge and perspectives of censored doctors and scientists since the start of the manufactured pandemic. In this time of extreme censorship and human need, Taylor Hudak reminded viewers of the importance of sharing the information presented during the symposium. She said: 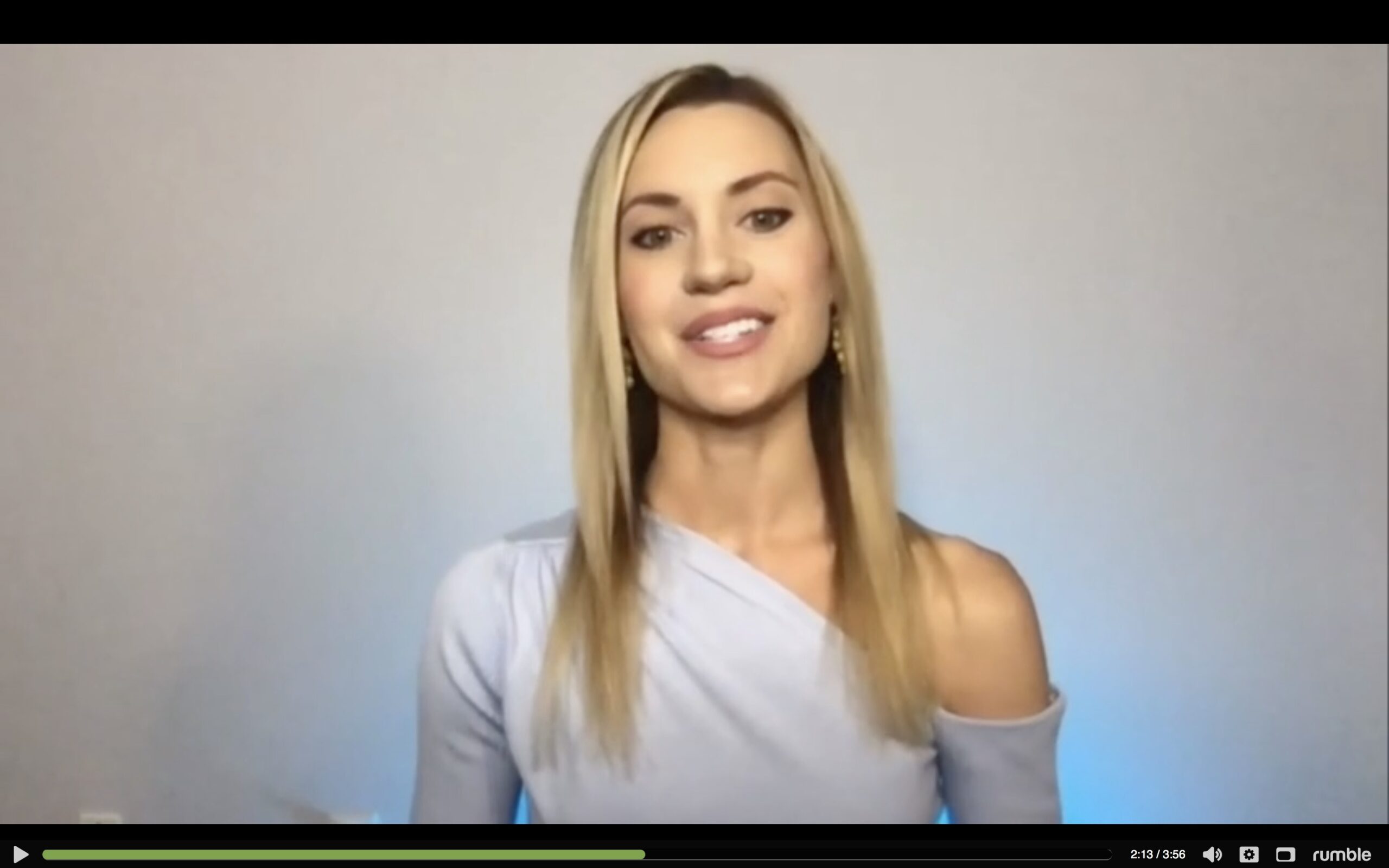 “We extend a big thank you to UK Column for hosting this fourth Doctors for Covid Ethics Symposium. And we thank all of you for watching. We are really counting on you to share this link and to spread this message and spread the word and raise awareness. So we ask that you please share this link with your friends and with your family and on your social media. Once again we thank you.”